I think we tend to build up our medical professionals as wizards, magicians, Gods. And in a way, they are. The work that they are doing is beyond belief, and I have gone into my surgeries with complete trust in these people, putting my life in their hands.

Lay-people have said to me all along ‘oh, you’ll be fixed as good as new by the end’ and ‘you may have concerns, but don’t worry, it’s amazing what they can do these days, they can fix anything’. Of course there is a lot of truth in that. And I know when people say these things, it’s to be reassuring. But I also want to point out that continuing to propagate these messages is somewhat dismissing the mammoth task these people are doing, as well as dismissing me for being realistic about it.

From the beginning, the surgeons and my implant specialists prepared me for that fact that although we were hoping for everything to go wonderfully smoothly, it really is a big and difficult job, and there are no guarantees. I just want to stress this fact. There were so many things that could not go according to plan. Apart from the usual surgery things, there’s also the fact that they’re trying to fix implants into a ‘jaw’ that is actually a shoulder bone… Like…what?! How is that even possible?

And this is why it was a combined job between Andrew Dawood and his specialist dental team, and the original surgeons who did my reconstruction. I saw Deepti before, and the surgeons after, but I wasn’t able to see the Dawood team at all during my hospital stay, which felt so odd because I knew they were there, behind the scenes… I was comforted knowing I had met them previously however, I can’t stress how much of a difference it makes to already know the people who are doing things to you while you’re asleep. Ok that sounded creepy…

Going into this surgery, they were planning on 5 implants. 3 zygomatic ones (those big ones that go into my cheekbones) and two ‘normal’ ones which just go directly into the roof of the mouth. When I woke up, my tongue found three. I wondered if this meant that it didn’t go as successfully as they had hoped, but Deepti mentioned the next day that they didn’t think they needed the other two, so I think that’s fine. She also said in passing ‘it was a bit of a difficult surgery, the left side was fine but the right side was a bit tricky, as you would expect considering how much we’ve done in there’.

Of course you don’t want your surgeons going on and on about how difficult it was and how much they struggled, but I wonder how much ‘it turned out ok’ in hindsight relates to some real struggles in surgery. So I really just want to take a moment to mention all the people who were in there, the huge team of people and support staff who were poking away at me, toiling through the hours of the evening to take me that next step.

So to follow up on ‘when I woke up, my tongue found three’, let me explain. The only difference I could tell post surgery (aside from swelling) is that there are there little caps sticking out of the roof of my mouth. As I write this now a few days later, I can hardly feel them anymore. The little caps are on the end of these three big metal posts that go through the roof of my mouth and into my cheekbones. Eventually these little ‘healing caps’ will be taken off and the teeth attached to them. These are what will anchor the new teeth in.

One other difference was that they released the damn scar tissue that was pulling my lip in. When I saw Deepti the next day she said I would be happy to know that they did that. I smiled and nodded. Well I tried to smile, but with all the swelling, I think I just looked at her. But I’m sure she knew I was smiling.

So it was around half 10 (pm) when I got back to the ward after surgery, I spent the trip to my bay chatting with Anna, the nurse from my ICU stay over a year ago. I think I was overcompensating for my dopey wakeup and was talking about 100 miles an hour. She said she’d been keeping up with the blog, nothing made me happier than hearing that.

I slept in bits and pieces overnight, as it goes when sleeping on a ward. It’s all a bit confusing, I’m not sure how much of that is related to the anaesthetic, and how much is just the odd environment and the people around you talking, turning lights on and off, alarms going off, etc. either way it’s all a bit disorientating. But I felt surprisingly calm. And I was grateful not to have a feeding tube (it was a potential risk), and holding onto those words I hoped I hadn’t dreamed: ‘it went well’.

The next morning was ward rounds and a whole army of people came by. Seriously, there were  about 20 of them. Through the sea of faces, Deepti came to the front, loitering at the back were Mr K and Mr Lieu (my original surgeons – I tried to smile at them, but I think my smiling capabilities were rather compromised, so again I think I just stared), and then Claire (surgeon from the first time around) rotated to the front at one point and said hi, more attempts at smiles from me.

They said I would be leaving that day and that Deepti would be around later to ‘fill up the holes with glue’. Ah now that’s terminology I can understand! Wait, you’re gluing my mouth up??? In the process of chopping through scar tissue and securing implants etc. some of the ‘flap’ (roof of my mouth) collected a few holes in it. Two that I could feel with my tongue but didn’t hurt, and one at the back that was quite raw and painful. Later that afternoon she came back and filled them all in.

It was quite a big day. A few other people I knew swung by and said hi, and I met with someone who was doing a Masters and working in patient involvement. She was awesome and we had a good chat, glad to be connected with her. Australian of course – we seem to find each other.

There was also an emergency on the ward during the morning, alarms going off, people running around, with phrases being shouted out such as ‘we got him back into surgery’ and ‘he just started bleeding and we couldn’t stop it’ ‘we had to give him 6 packets of blood’. Don’t worry, it wasn’t my friend, he was recovering down in ICU at this point. But it was a little throw back to me getting rushed back into emergency surgery over a year before, from the exact same ward. I hope he was ok, as I was then. But of course, ok because the surgeons rushed back into surgery to save him. What a job. Nurses had to go and change their uniforms as they had blood on them. This hospital business is serious.

So eventually Deepti made her way back to me, having dealt with the emergency and she filled my holes and we had a chat. She said she’d see me again in clinic in a week or so.

I also saw a nutritionist. The hospital is not set up for people who need a liquid diet. Yes they have soup (when they haven’t run out) but they had on my file that I could only have yoghurt. But it wasn’t easy to find yoghurt, and the nutritionist said she thought I probably wasn’t allowed yoghurt because it wasn’t liquid enough. I had been fasting since Monday night for surgery, and it was now Wednesday morning. Someone gave me a yoghurt after surgery so I had that, but then I wasn’t sure what I could or couldn’t eat. It was like going back to a year ago when there was literally nothing in hospital that I could eat. At least this time I was physically able to put yoghurt in my mouth, but the year before I was not able to because of the swelling, which meant no food while in hospital for Jen. When the nutritionist turned up she gave me some terrible supplement drinks to take home and we discussed what I would eat once I was discharged. I’ve got this, I promise. Ain’t my first rodeo.

The ward ordered my discharge meds, but said it would take some time. It always takes some time. So I popped down to ICU in the meantime  to check up on my friend. He was waiting to come up to the ward. On the way I ran into a nurse who works at UCLH who I know from Instagram (and obviously have mutual contacts) but have never actually met. That was pretty great. Glad she recognised me, I was in a bit of a daze the whole time I was in there.

My friend was doing ok. He had a big surgery, I knew how he must have been feeling. Exhausted, to say the least. But it was nice to say hi to him and his parents. Sending so much love to them all. I can’t begin to explain how happy I had felt that we were both going back in on the same day, both getting some sort of progress, and how great it had been to see him. We’re in this together.

My nurse (again, another familiar face from the year before) said that it would take forever to get the meds to the ward but it wouldn’t take so long if I went to pick them up at the discharge lounge. So I packed up my things, said bye to my ward buddies and set off to the discharge lounge.

When I got there, they made me a cup of tea (dream) and said that my meds would be there within an hour. Great. I don’t want to dwell on it too long but it took about 3 hours until they finally got my meds. It was 6pm by this stage, my painkillers had long since worn off and I was exhausted from talking, smiling (/staring) and being switched on. I was in pain, I was tired, I needed to get home. It had been less than 24 hours since surgery and I just needed to get out of there. I hit a wall. I started crying at one point when they came back after a couple of hours and said there was still no sign of my meds. One of the people kept trying to talk to me but I had to tell her it was too painful to keep talking. I blew my nose and there was blood (there had been all day, it was an expected side effect, they drilled through my sinus cavities, though without puncturing the mucous lining). Eventually they tracked down my meds, I got in the Uber (there was an Uber strike that afternoon of course, but a couple were still working) and I eventually got home, collapsed and slept. 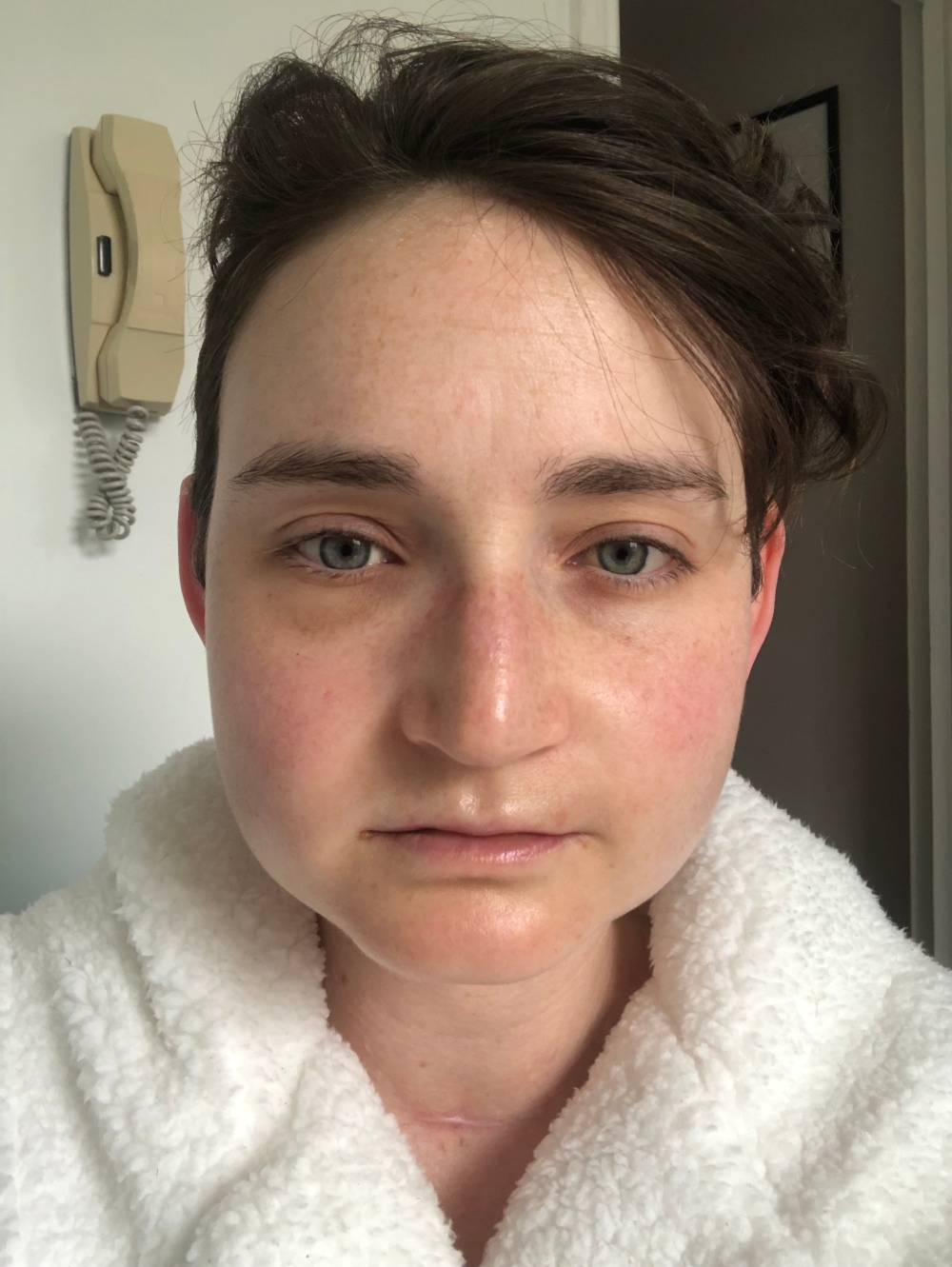